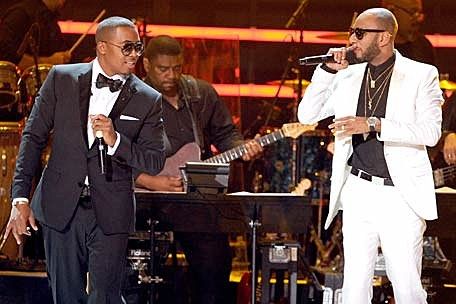 In doing promo for his next project Poison, hip hop producer extraordinaire Swizz Beatz revealed that he had a completed a full-length album with Nas back in 2016 within a week’s time. Hence on DJ Khaled’s 2016 album Major Key a track was released featuring Nas titled “Nas Album Is Done”. At the time there were no details available regarding the project. The following year Swizz Beatz had a head to head battle of the beats with producer Just Blaze live streamed on Hot 97. The high point of the battle was when Swizz Beatz played an unreleased track that featured Nas, Jay-Z, Jadakiss, and DMX. More than likely the song was meant for the album Swizz and Nas worked on the previous year.

Nas and Swizz Beatz have been collaborating together since 2001. The first track they ever worked together was “Salute Me”. The track for some reason was never commercially released, but did make it onto the mixtape circuits. A remix of the song that had Nas along with Fat Joe and Cassidy did land on 2002 compilation Swizz Beatz Presents G.H.E.T.T.O Stories. Literally days after the compilation’s release Nas’s God’s Son came out including the bonus track “G.O.D.” produced by Swizz Beatz.

It would not be until 2009 a track would surface with Nas produced by Swizz Beatz. That track was labeled as “Be Worried” and had been leaked onto mixtapes.  Swizz Beatz fans would recognize the instrumental from his 2007 album One Man’s Band under the track “Top Down”.  Swizz had disclosed that the track was originally meant for Nas.  In 2011 the track was remastered under the title “Top Down (Nas Edition)” and released as part of Swizz Beatz Monster Monday series where he would put out previously unreleased tracks he did with high profile artists. The two would then link up on Nas’s 2012 album Life Is Good on the track “Summer on Smash” which also featured r&b singer Miguel.

Hopefully at some point in time the Nas and Swizz Beatz project will see the light of day. The two have an impressive track record.  Nas has also shown he is still a high caliber emcee with his recently released album Naisir.  As evident with the reaction to the unreleased track Swizz played last year from the project it would be well received.  To hold the fans over Nas will be on Swizz Beatz’s upcoming album Poison.

Nas and DJ Premier: Next Album on Deck?!?!