Eve and Dr Dre: Aftermath and Beyond 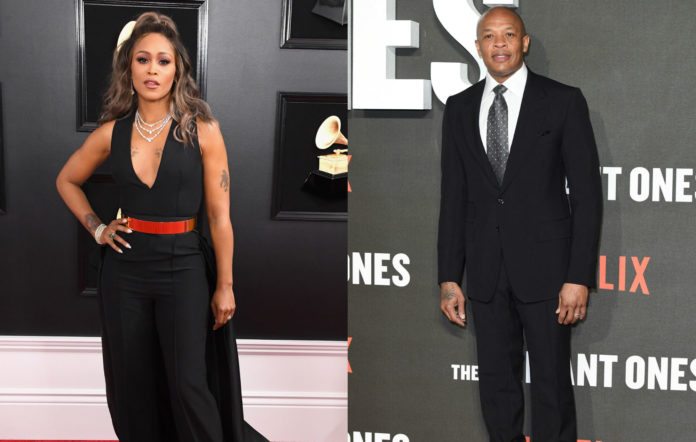 It has been well documented that Eve was signed to Dr. Dre’s Aftermath label before her run with the Ruff Ryders label. Even though her tenure with the label was short and did not pan out, Dr. Dre would still play a significant role in her career. Eve would describe how Dr. Dre was tough and challenging to work with. This resulted in bringing the best out of her, leading to some of Eve’s biggest hits.

Initially, Eve had an impromptu audition for Michael Lynn, who was the A&R and President of Aftermath at the time. He was immediately impressed and flew her out to Los Angeles to cut a demo with Mel-Man, an up and coming producer on the Aftermath label. From those sessions, the track “Eve of Destruction” was created. Dr. Dre signed Eve, and the song made it onto the Bulworth Soundtrack in 1998.

During this period, Dr. Dre was working with Eminem on the Slim Shady LP. As a result, Dr. Dre had Eve record with other producers at the label. She grew impatient, and Dr. Dre dropped her from Aftermath. Fortunately, though Jimmy Iovine, head of Aftermath’s parent company Interscope orchestrated Eve with another label, he had a relationship with Ruff Ryders Entertainment. This was delved into on Eve’s episode of Driven, starting at the 15 minute mark.

Dr. Dre and Eve would reunite on her sophomore album Scorpion in 2001. He would produce the album cut “That’s What It Is” featuring Styles P. The other track was the single “Let Me Blow Ya Mind,” featuring Gwen Stefani. The song would become one of the biggest of Eve’s career and earn her a Grammy.

Due to the success, Dr. Dre contributed to Eve’s follow up 2002 album Eve-Olution. This time around, he paired up Eve with his artist Truth Hurts on “What” and produced the single “Satisfaction.” The duo would link up again on “Not Today,” a single off of Mary J. Blige’s 2003 album Love & Life. The following year Gwen Stefani teamed up with Eve and Dr. Dre again for “Rich Girl” off her Love. Angel. Music. Baby project. Once again, the trio came up with a colossal smash nominated for a Grammy as well.

Eve’s career path was meant to be. She had mentioned that her persona of Eve of Destruction while with Aftermath would not have been successful. It took her to become Eve with the Ruff Ryders to make that happen. Nonetheless, Eve was able to work with Dr. Dre, leading to several of her biggest hits and even a Grammy.