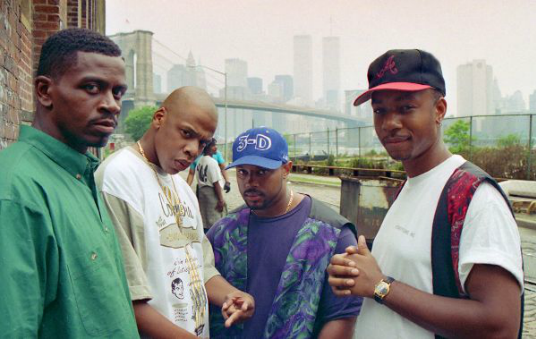 It has been over a month since Sauce Money has called out Puff Daddy for his Grammy speech of taking care and pushing the culture forward. That the Grammy institution needs to get their act together when it comes to black artists. Sauce Money commended the message but vilified Puff Daddy for “blackballing” him. Most notably allegedly blocking him from appearing on Drink Champs, a platform tied to Puff Daddy’s Revolt. He also called out Jay-Z, someone he was close with since being a teenager and was prominent early on in his career.

Sauce Money had asked Jay-Z since he is close with Puff Daddy to be a facilitator, to have it just fall on deaf ears. After 2000 Sauce Money has most prominently worked with DJ Kay Slay. Showing up on a number of his projects including the just released Living Legend, contributing to the hard-hitting track “Back to the Bars, Pt.2”. Sauce Money showcasing he hasn’t lost a step, hanging with the likes of Sheek Louch and Styles P. Back in November of last year DJ Kay Slay conducted an interview with Sauce Money with the focus of his relationship with Jay-Z and Puff Daddy.

Sauce Money was initially introduced to Puff Daddy by Jay-Z to ghostwrite lyrics for the 1997 project No Way Out. Most notably Sauce Money wrote the lyrics to Puff Daddy’s biggest hit “I’ll Be Missing You”. He would also write Puff Daddy’s part for “Young G’s which featured Jay-Z and The Notorious B.I.G. Sauce Money contributed to other tracks on the album as well as the follow up 1999’s Forever. Also showing up on the posse cut “Reverse” with Shyne, Busta Rhymes, Redman, and others.

Puff Daddy would appear on “Do You See” from Sauce Money’s 2000 album Middle Finger U. Apparently Jay-Z had told Sauce Money to stop writing for Puff Daddy. Sauce Money obliged to only see Jay-Z allegedly to take over his role. Till this day Sauce Money has only put out one album so to make a living, ghostwriting had been a significant source of income.

Another interaction Sauce Money shared with DJ Kay Slay of Jay-Z acting unfavorable was in 2007 when he was Def Jam’s president. Jay-Z had listened to some tracks Sauce Money had worked on and given the impression of being receptive of the work. However, he would then tell Sauce Money that he didn’t believe in his dream. The words were extremely hurtful with the fact that they shared the same dreams. Knowing each other since they were both 13 and both being together on the grind to establish themselves in the record industry.

The first time the two appeared on a record commercially was on Big Daddy Kane’s “Show and Prove” from Big Daddy Kane’s 1994 album Daddy’s Home. The track created a buzz but no record deal. Jay-Z would go on to record a demo with Sauce Money produced largely by DJ Clark Kent. Many would argue that these classic tracks were amongst Jay-Z’s best work. Some of the notable tracks were “Rippin It Up”, and “Nuttin But Love”.

Jay-Z in 1995 landed a short -lived record deal with Payday Records putting out his debut single “In My Lifetime” with a remix of “I Can’t Get Wid Dat” featuring Jaz-O and Sauce Money. The following year Jay-Z would out his debut album Reasonable Doubt with Sauce Money showing up on the DJ Premier produced “Bring It On”. That same year Jay-Z and Sauce Money would both appear on “Foundation” with Big Jaz aka Jaz- O. Sauce Money then popped up on “Face Off” from Jay-Z’s 1997 album In My Lifetime, Vol. 1.

Sauce Money would close out the posse cut “Reservoir Dogs” alongside The Lox and Beanie Sigel on Jay Z’s 1998 Vol.2 …Hard Knock Life. The Brooklyn duo would also appear on several soundtracks that same year as well. This included the Streets Is Watching soundtrack with “Celebration” and “From Marcy to Hollywood” from The Players Club soundtrack.  The final time Sauce Money and Jay-Z worked together was on “Pre-Game” from Sauce Money’s 2000 album Middle Finger U.

It is a shame that Sauce Money after all these years is at odds with Puff Daddy and Jay-Z. Sauce Money played a significant role in the success of both of their careers. Sauce Money is a gifted lyricist who should not be blocked from having access to any platforms. As he expressed, it has had a negative effect on his career but more importantly the ability to provide for his family.