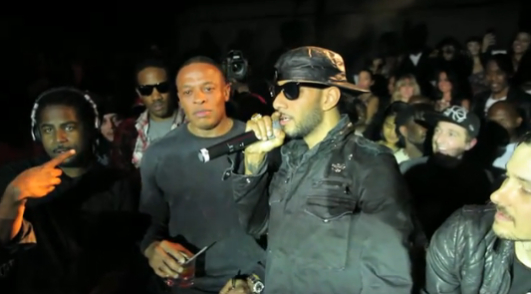 Producer extraordinaire Swizz Beatz recently made an appearance on Drink Champs to promote his recently released album Poison. During the interview N.O.R.E coined Swizz Beatz as the “East Coast Dr. Dre” due to the caliber of his discography. The statement is ironic due to the fact that Swizz throughout his career has worked with prominent West Coast artists who have a direct affiliation with Dr. Dre.

Swizz Beatz even teamed up with Dr. Dre on an unreleased track “Chillin” back in 2011. More than likely it was intended for Dr. Dre’s Detox project. Swizz’s album Poison includes the track “Something Dirty/Pic Got Us” which features Kendrick Lamar paired up with Jadakiss and Styles P from The Lox. His production showcases the ability of meshing well with artists regardless of what region they are from.

The first artist that Swizz worked with closely associated with Dr. Dre was Snoop Dogg. He made an appearance on “WW III” alongside Scarface, Jadakiss, and Yung Wan. The track appeared on the Ruff Ryders compilation Ryde or Die Vol. 2 released in 2000. The following year Nate Dogg appeared on Jadakiss’s debut solo album Kiss Tha Game Goodbye, singing on the hook for “Kiss Is Spittin. In 2002 Swizz linked up with Snoop Dogg again on “Bigger Business” with Jadakiss, Ron Isley, Diddy, Birdman, Cassidy and TQ. The posse cut appeared on Swizz’s compilation, Swizz Beatz Presents G.H.E.T.T.O Stories.

Then in 2006 Swizz contributed the track “Sittin on 23z” to Tha Dogg Pound’s album Cali Iz Active. That same year he would work on The Game’s Doctor’s Advocate with the song “Scream on ‘Em”. Another track, “State Your Name” that Swizz produced for The Game would appear on mixtapes.  Lil Flip and Cassidy were featured on the track as well. The last artist Swizz has worked with affiliated with Dr. Dre was Ice Cube on “Don’t Make Me Hurt Ya Feelings” from 2008’s Raw Footage.

After being in the game for twenty years Swizz Beatz production is still innovative and energetic as evident in his album Poison. He has certainly earned the right to be in the conversation of the best hip hop producers alongside with Dr. Dre. Swizz Beatz has made timeless classics with artists of all regions including the West Coast. As Swizz alluded to in The Drink Champs Interview, he feels that he has barely scratched the surface and is still hungry despite all his accomplishments.  This is a true testament to his greatness.

Tupac and Treach: Dedication from the Heart
Method Man: Ties to the West
Nas with Kool G Rap and MC Serch: Early Career