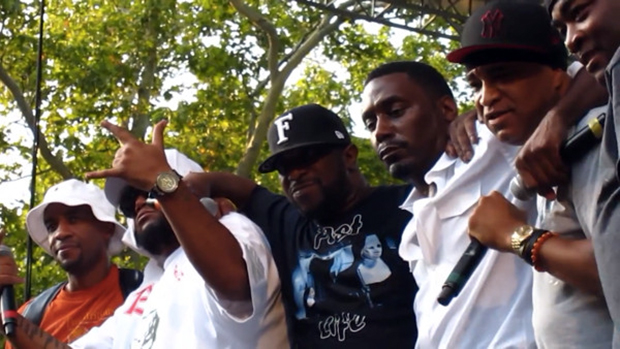 Last month DJ Premier dropped the track “Eat” on his Sirius XM radio show. For good measure Evidence, best known for his work with Dilated Peoples is also featured on the gem. The track will allegedly be on an upcoming Masta Ace project which may very well be his last. In an interview conducted late last year Masta Ace shared with hip hop journalist Soren Baker that he was going to shift his focus and develop projects in other mediums including a musical, tv pilot, and screenplay.

If that is indeed the case, Masta Ace will be wrapping up his career on a high note. Just like how he burst on the scene over thirty years ago with 1988’s “The Symphony”. A classic produced by Marley Marl and alongside Masta Ace featured Kool G Rap, Big Daddy Kane, and Craig G. The next collaboration to mention is “Crooklyn” which served as the title track for the soundtrack of Spike Lee’s film of the same name. Masta Ace was joined by Special Ed and Buckshot from the Boot Camp Clik to form the Crooklyn Dodgers. A Tribe Called Quest handled the production duties.

In 2000 Masta Ace would link up with Guru from Gang Starr for the track “Conflict”. That same year Masta Ace recorded “Hellbound” which also included Eminem for the compilation album Game Over. The significance of this collaboration is the fact that Eminem has mentioned Masta Ace as one of his idols. You can hear the influence Masta Ace had on Eminem’s delivery.

If Masta Ace’s next album is to be his last it must receive the push and attention that he deserves. Throughout his career fellow high caliber emcees have shown respect to Masta Ace. Standing by his side and working together with him. To do his career justice hopefully there will be a number of heavy hitters that are high caliber like DJ Premier and Evidence associated with Masta Ace’s swan song.