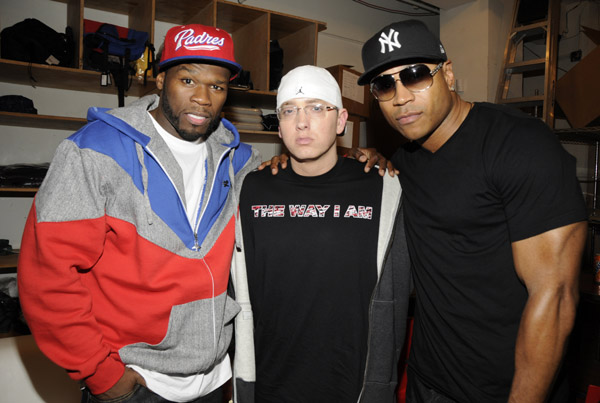 In 2006 LL Cool J dropped the album Todd Smith through his longtime record label Def Jam. Other than sharing his frustration with the label for the handling of his album 14 Shots to The Dome back in 1993 at least publicly he was content with the label. Todd Smith came out strong initially but then disappeared from the charts quickly. It still managed to be certified gold but LL Cool J was unhappy with the results. He felt with the label at the time being run by JAY-Z and a new marketing department that they had dropped the ball. They did not give the project the push he was accustomed to. LL Cool J had to strategize so his next and final album for the label would have a better outcome.

LL Cool J figured out that Jay-Z and the Def Jam label would pay attention to him if someone prominent was attached to the next project. He ultimately aligned himself with 50 Cent. At the time 50 Cent was still one of the most powerful and biggest selling artist in music period. The plan was to have 50 Cent executive produce the album and appear on some tracks. The title of the album was going to be called Todd Smith Part 2: Back to Cool.

They hopped in the studio and were able to knock out several tracks. There was a strong buzz and a high level of excitement with the partnership. As a teaser they put out a track that served as the remix to LL Cool J’s final single Freeze off the Todd Smith project in the spring of 2006. The track was completely different from the original, and was given the name “You Can Bump This”.  Along with LL Cool J and 50 Cent, G-unit artists Hot Rod and Lloyd Banks appeared on it as well.

The track was well received. Beyond being involved with LL’s album, 50 Cent was working on his next album Curtis. He was concocting a huge marketing campaign for the project with Jay-Z and Def Jam. The campaign was to pit his album in direct competition with Kanye West’s album The Graduation. They would release the albums on the same day and do press together to hype it up. With all that was at stake Jay-Z and Def Jam had to give LL Cool J’s upcoming album the appropriate attention and push.

At some point things went south though between LL Cool J and 50 Cent. As executive producer 50 Cent wanted to make sure he was compensated fairly due to his high market value at the time. LL Cool J did not feel the business was right and went cold on 50 Cent. It would be months before they would communicate again. Once they reconvened LL Cool J removed 50 Cent as executive producer and giving it to himself instead. He would compensate 50 Cent for the work he had contributed.

Just a couple months before LL Cool J’s album would come out, 50 Cent’s  group G-Unit would drop their sophomore effort Terminate On Sight. One of the favorite tracks on the project was “Straight Outta Southside”. There was a mixtape version making the rounds where LL Cool J had added some bars. There was a concert held in correspondence to the release of the project. When LL Cool J was brought out on the stage the crowd went insane. Around that time another track called “Queens” would pop up on the mixtape circuit as well. LL Cool J would appear along with 50 Cent, Prodigy, Kool G Rap, and Tony Yayo. LL’s entire verse was aimed at his displeasure with Jay-Z.

As far as LL Cool J’s final album for Def Jam was concerned, he renamed it Exit 13. 50 Cent’s presence on the album is kept to a minimum. He would end up being just on the track “Feel My Heartbeat” which would end up being a single. The album itself failed to be certified gold.

Exit 13 was a decent album but would have been much better if the initial vision had remained intact of 50 Cent being the executive producer. Eminem who 50 Cent was signed to at the time was a huge fan of LL Cool J’s. He probably would have been involved to some capacity and may have hopped on a track. LL had even spent some studio time with Dr Dre.  He may have contributed as well. The bottom line is that the album would have been memorable. Being at least certified gold and ending his tenure with Def Jam on a high note.

Warren G and 2Pac: Bridge between Death Row and Def Jam
Fat Joe and KRS-One: Working with the Teacha
Eminem: Run with GUnit