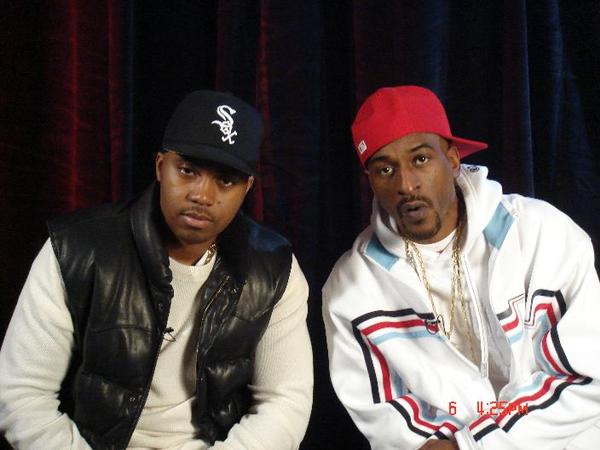 Nas has just released the single “Jarreau of Rap (Skatt Attack)” from the highly anticipated compilation album Lost Tapes II which is set to drop next week on July 19th. The project consists of unreleased tracks recorded during the sessions of Nas’s of his last four albums dating back to 2006’s Hip Hop Is Dead. A track that may have very well been recorded during the Hip Hop is Dead sessions but remains a mystery is the “Unauthorized Biography of KRS-One”.

The track is mentioned at the end of “U.B.R (Unauthorized Biography of Rakim), serving as “the next chapter” from Nas’s 2004 double album Street Disciple. Erick Sermon recently while promoting his album Vernia on The Breakfast Club revealed that the song stemmed from a conversation Nas had with him during a studio session. Check the interview at the 25:39 mark. The song caused some friction between Nas and Rakim although the initial purpose of the song was to serve as a tribute.

Rakim has admitted in interviews that he is a private guarded individual who took offense of his government name and his daughter’s name being put out to the public. Ultimately it was resolved and Nas and Rakim went on to work together on 2007’s “Classic (Better Than I’ve Ever Been) with KRS-One, Kanye West and produced by Dj Premier. They had appeared together on “N.Y. State of Mind Pt 3” back in 2003. A track meant for Alicia Keys 2003 album The Diary of Alicia Keys but for some reason was never officially released.

Erick Sermon as a member of the duo EPMD had a more serious beef with Rakim early on in their careers as a result of a misunderstanding escalated by third parties. On Eric B. & Rakim’s 1987 debut Paid in Full there was a line from the classic “Ain’t No Joke” at the end of the second verse which read as “You could get a smack for this, I ain’t no joke”. The following year EPMD released their debut album  Strictly Business which included “You’re a Customer”. On the second verse Parrish Smith spit the line “It’s like a Diggum Snack. Smack me and I’ll smack you back”.

Eric B. and Rakim then proceeded to drop “Follow the Leader” with the lyrics “Stop buggin’ a brother said dig him, I never  dug him./ He couldn’t follow the leader long enough so I drug him”. The other moving piece was rumblings that EPMD was a poor man’s version of Rakim., This was addressed on the lead single “So Wat Cha Sayin” from their 1989 album Unfinished Business. Lyrics read as “People round talkin’ this and that/ Of how we sounded like the R, and our music was wack/ Dropped the album Strictly Business and you thought we was bold/ Thirty days later the LP went gold/ So what you sayin'”. When both duos ran into each other face to face tensions were extremely high. Fortunately though the situation was able to be hashed out.

By Erick Sermon revealing he had provided Nas the information that led to the song “U.B.R (Unauthorized Biography of Rakim)” it gives the song more context and meaning. It is ironic that the track had caused tension between Nas and Rakim just like how Erick Semon had experienced with him but at a higher level. Fortunately in both cases everything was worked out. Over the last two years Rakim has reunited with Eric B and been touring heavy. On a personal tip I attended one of their shows ans met the duo asking them if another album was in the works, Rakim’s words were “Will see how it goes”. With back to back tours under their belt the prospects look promising. How fitting would it be to have both Nas and Erick Sermon contribute to a project if it were to come into fruition.

Looking for ways to earn extra money online? Click the link to see what opportunities are out there.

Redman and Erick Sermon: About To Blow Your Mind

Are you a gifted writer and would like to earn some extra cash, click the link below. What do you have to lose?