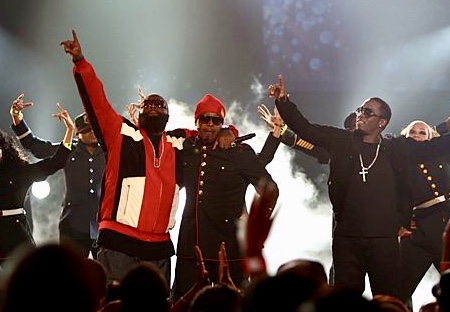 Throughout his career there have been moments where Rick Ross has put pioneers back in the spotlight.  Giving   them that “Maybach Music” shine.  Artists who trailblazed paths but in recent years had kept a quiet profile.  Rick Ross truly understands and respects the hip hop culture.

The first track to mention is “Murda Mami” off of Rick Ross’s 2009 album Deeper Than Rap.  It featured none other than Foxy Brown.  Foxy Brown had a run from 1996 to 2001 as one of the top female emcees in the game.  After that time period prior to appearing on Rick Ross’s album she had several albums that were shelved, legal problems, and a hearing issue.  She had a mixtape, Brooklyn’s Don Diva released the prior year and a couple tracks here and there.  Being on Rick Ross’s album was her biggest look in nearly a decade.

The second track to discuss is the remix to “Mafia Music”.  The original was the lead single from the same album, Deeper Than Rap. Along with Rick Ross, the track consisted of Fat Joe, The Game, and Ja Rule.  All the artists at the time had beef with 50 Cent. The song served as one huge diss track towards him.  Ja Rule had the most history of going back and forth with him.  Most fans agreed that Ja Rule stood out the most.  It served as an official comeback for him.  Prior to that he had been relatively quiet since 2005 when he left Def Jam Records and Murder Inc.  He had released an album independently, The Mirror with little fanfare in 2007.

The next track to bring up is the remix to “The Magnificent” which was off the same album.  Rick Ross was accompanied by Big Boi and Special Ed.  Special Ed was one of the most promising artists from the late 80s early 90’s.  His last major label album had dropped in 1995.  Beyond that he had released an album independently in 2004 which went unnoticed.  He had been a casualty of record label politics.  It was only fitting that he was Rick Ross’s track since one of his classic songs was “I’m The Magnificent”.  Fans were excited to hear from him.

On Rick Ross’s next album 2010’s Teflon Don he had the track “MC Hammer” which featured Gucci Mane.  It was a nod to MC Hammer during his prime, living larger than life.  Rick Ross brought him out to open the 2010 BET Hiphop Awards.  Hammer would pop up here and there but really had not been in the limelight for quite some time.

The last track to mention is “Can’t Say No” form the 2015 album Black Market.  The track has Mariah Carey singing the hook.  A remake of “Can’t Let Go” off her sophomore album 1991’s Emotions.  Mariah Carey always remained in the spotlight due to her persona and extensive track record.  However, music wise other than one top twenty minor hit with Miguel with “Beautiful” back in 2013 she had not had a smash since 2009.

These artists Rick Ross brought back to the forefront are legendary and timeless.  Rick Ross himself has been in the game for almost twenty years at this point.  Once his career winds down, years later I am sure someone will want to bring him back with that “Maybach Music” shine. Always great to see artists give the respect to those who came before them.

Pusha T and Rock Ross: Talks of a Collaboration Project

Janet Jackson: This Is the Remix
Michael Jackson: Hip Hop Ties
2Pac and Stretch: Before the Fallout