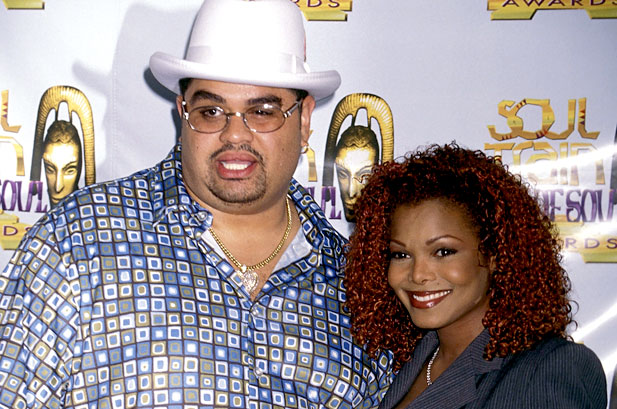 Heavy D during his illustrious career worked together with a number of R&B artists. His debut album 1987’s Living Large served as a catalyst, launching Uptown Records. One of the most influential hip hop and R&B labels ever formed.  Beyond recording with some of the top R&B artists of the time Heavy D would be instrumental in mentoring and developing some of their careers as well. At the time no other hip-hop artist rivaled Heavy D other than LL Cool J in terms of appeal to the R&B world.

The first R&B artist Heavy D worked with was fellow label mate Al B Sure. The first occurrence being on “Don’t You Know” from Heavy’s Living Large album. Then once again on Heavy D’s “Somebody for Me” from his 1989 album Big Tyme. At this point in his career Heavy D had established a name for himself and landed a collaboration with Janet Jackson on “Alright” from her album Rhythm Nation.

Heavy D – Don’t You Know feat. Al B Sure

Heavy D – Somebody for Me feat. Al B Sure

In 1990 Heavy D would contribute the self titled theme song to the classic sketch show In Living Color along with the R&B act The Gyrlz. That same year Heavy appeared on Guy’s Future album with the collaboration “Do Me Right”. Aaron Hall, the lead singer from the group would return the favor and appear on Heavy D’s “Now That We Found Love” from 1991’s Peaceful Journey. On Peaceful Journey, the self-titled album track included background vocals from Jodeci. A group that Heavy D was instrumental in getting signed to Uptown Records.  He then lined them up with a young Puff Daddy to spearhead artist development.

That same year Heavy D would show up on the biggest album of his career, Michael Jackson’s Dangerous album. The song was “Jam” which served as a single off the project. Another highly visible appearance Heavy D made with an R&B artist was Mary J Blige on the remix to “My Love” produced by Teddy Riley.  A track from her 1993 sophomore album What’s the 411? Remix.

1994 brought Heavy D’s most successful album to date, the double album project titled Nuttin But Love. The biggest song from the project was “Got Me Waiting” which had a remix featuring the group Silk. By the mid 90’s Heavy D became deeply involved in producing and a record label executive. One group he was very hands on with was Soul for Real. Serving as a writer and executive producer on several of their projects including their platinum selling debut 1995’s Candy Rain. Making an appearance on the remix to the title’s track. He was also instrumental with the career of R&B singer Monifah, producing a good amount of her first two projects and appearing on her 1996 debut single “I Miss You (Come Back Home)”.

Monifah – I Miss You (Come Back Home) feat. Heavy D

During his career Heavy D was such a prominent figure in the R&B world. He recorded with some of the largest R&B artists of his time.  Beyond that though Heavy D discovered artists, gave them their big break.  As well as produce and help develop artists to achieve prominence. Heavy D, a true talent who is sorely missed.

Nas and Prodigy: Queensbridge Politics
Jay-Z and DJ Clark Kent: On the Come Up
DJ Premier and Royce da 5’9”: Two Turntables and a Mic