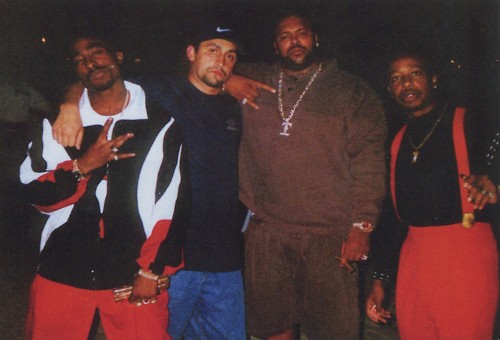 In 2018 MC Hammer still carries the charisma and stage presence that still garners attention like his prime during the late 80’s into the early 90’s. His material from the mid 90’s on was overlooked. There are quite a few gems that should have translated into greater success on the charts starting with 1994’s The Funky Headhunter and the 1996 unreleased Death Row album Too Tight. Hammer had stepped it up flow wise and the production became tighter. During this time Hammer worked with some notable producers.

1994’s The Funky Headhunter showed Hammer shifting to a leaner sound with street influence. On this project he worked with Tha Dogg Pound on “Sleepin’ on a Master Plan”. The other notable producer with the album was Teddy Riley. He assisted with the keyboard work on the biggest hit on the album “Pumps and a Bump”. Teddy Riley would take the lead in producing the tracks “Oaktown” and “Don’t Stop”. The album managed to achieve platinum status.

MC Hammer – Pumps and a Bump (prod. by Teddy Riley)

Hammer would have managed to maintain platinum status or greater if his 1996 Death Row album Too Tight had seen the light of day. Not only did it have features of elite West Coast artist but the production was top notch as well.  One of the main contributors was Johnny J who did extensive work on Tupac’s 1996 album All Eyez on Me. The tracks Johnny J produced that Hammer appeared on were the title track to his album Too Tight as well as “Unconditional Love” and “Too Late Playa” featuring 2Pac and Big Daddy Kane. In addition Hammer appeared on a track “So Long” alongside Death Row act O.F.T.B during that time period that was produced by Johnny J as well.

In 2006 during the hyphy and crunk era Hammer independently put out the album Look Look Look and sold about 300k units.  Some of the success was attributed to having Scott Storch and Lil Jon producing tracks.  Scott Storch produced the title track “Look Look Look” and “HammerTime” while Lil Jon provided the production on “Yay”. Lil Jon would also work on Hammer’s 2009 album DanceJamThe Music with the song “I Go”.

MC Hammer put out some great material after his career had peaked. Top of the line producers brought the best out of him. He should not be solely defined by the Please Hammer Don’t Hurt ‘Em and Too Legit to Quit era. In my opinion his best work was during The Funky Headhunter and Too Tight era followed by when he was on the come up putting out Feel My Power and Let’s Get It Started.